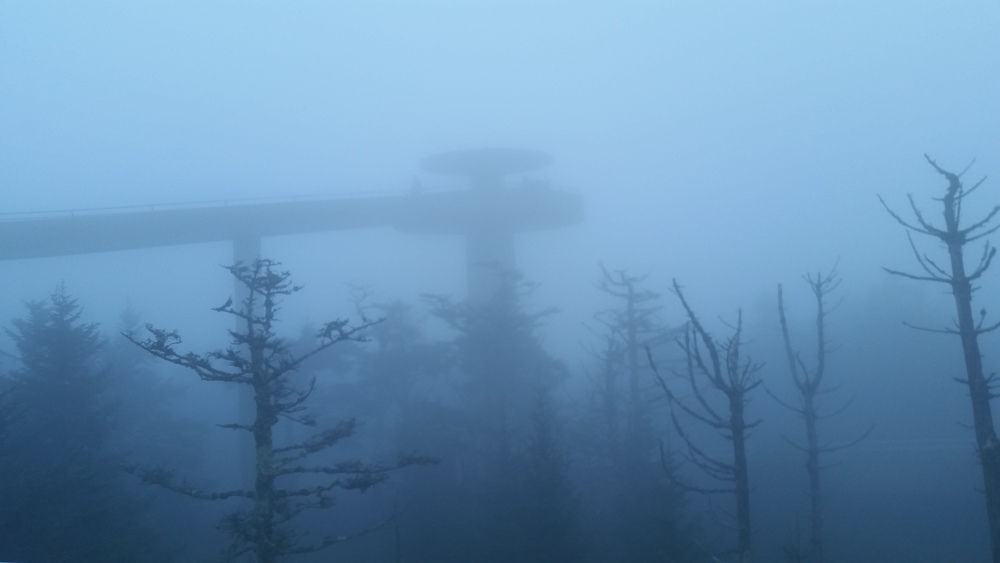 I’ve recently finished the game Obduction, an adventure game by the creators of Myst. I try not to give any spoilers or even general information about the game because I prefer to find out everything like that myself. But my summary of this game is a spiritual sequel of the Myst games while not being an actual sequel, and will bring back memories of the originals but is a whole new experience.

I love exploring, be it in games or in real life. For instance the header image on this post is of Clingmans Dome in the Smokie Mountains which I thought looked very Myst-like.

And so I love exploring new worlds in games like this.

Obduction has a premise similar to Myst, you find yourself in a strange world centering on the method that got you there, which is also used as a puzzle mechanic. Also like Myst, it has a great story about this strange world revealed to you not with video clips or dialog trees but with what’s revealed to you by the environment or found notebooks.

A difference between Obduction and Myst is this is fully 3D. Even though Myst was mostly still pre-rendered images, it was still from a first-person perspective that made it even more immersive. Shivers 2 was another first-person pre-rendered still image adventure game that I consider a favorite, but had a horror theme. There was the release of realMyst 3D which updates Myst to a full 3D high-def version of the game that I recommend. I played the first iteration of realMyst, it had a grittiness that I liked, but the latest version I have on Steam is even more high-def and more beautiful.

The game doesn’t have characters with much exposition like classic point-and-click adventure games, similar to Thimbleweed Park that I’ll probably play next. I really like media such as this, games or movies or books that are portrayed as if for people that are already in that world which I thinks leads to a greater sense of immersion. The game Machinarium is I feel in between these two, it’s not too expository, there’s not even any dialog.

Obduction and Myst also don’t have the kind of weirdness I feel can be seen with adventure games. Sure they’re in strange worlds, but not like the game The Witness which can feel abstract (which was also called a spiritual successor to Myst).

The game continues the design of having a lack of inventory with the puzzles relying on manipulating the environment and not using something you picked up. This is a great example of turning the limitations of Hypercard into a feature.

The use of 2D video is another example of sticking with something that came about because the limited technology in the past, but this one is a bit more obvious. However I think it still works, but that may be my nostalgia thinking it’s a nice nod to the past games along with some other references to them.

I’m also a fan of small self-contained worlds. Myst worlds were islands. Obduction has its own way of limiting where you can go that also works really well as a puzzle mechanic. One of my other favorite games is The Legend of Zelda: Link’s Awakening for the original Game Boy that also uses the island as a limitation to the size of the world, making it feel like the small hand-held world that it is.

Like the other games, the puzzles in Obduction can also be awkward with no indication of where to go next if you don’t notice or get some small detail. I even remember seeing one of these details but didn’t think it was a hint until recalling it later.

It was just really great playing this and feeling again like playing one of the originals on a friend’s computer in their basement, or in the school’s computer lab where a teacher somehow let me play on school computers and I wasn’t even in a class at the time.

Thinking of the originals, I’m also reminded that Myst took advantage of the new tech of CDs at the time. No other game that I know of were as well known for this advancement, and there was whole consoles that tried to ride that like Sega CD (I was a child prodigy at Sewer Shark, the neighbor’s house I beat it on my first full sit-through and how amazed they were). I remember all the sleeves the original Myst games came with and having to swap them out as you went to different worlds. But with Obduction I don’t even have any physical medium for it, I downloaded it off Steam.

I realized that the Myst games seemed a bit more fantasy while Obduction is more sci-fi. They actually described it as Myst in space. I’m excited about their next game Firmament, which is a steampunk theme. This makes sense as Jules Verne was described as an influence for some puzzles in Myst.

I also heard that some people don’t play through these games but do like loading them up and just wandering around these beautiful worlds without worrying about solving the puzzles.

If not, maybe I’ll just load up some old saves from these games while I wait for new ones like Firmament, and just wander around these strange and beautiful worlds.